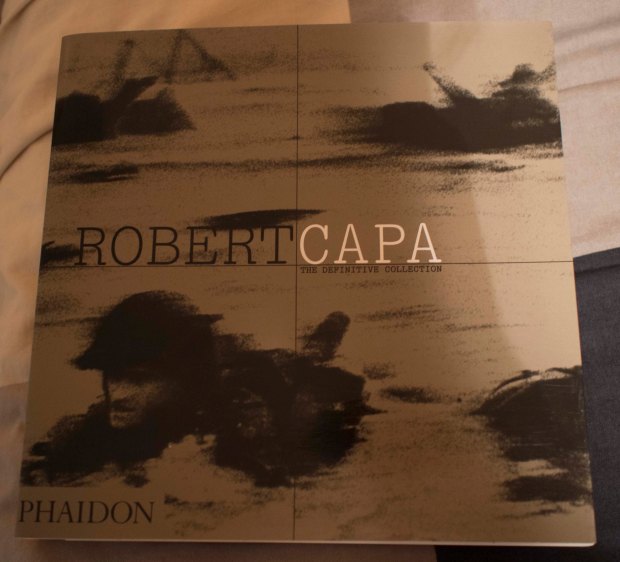 This is a little different from the usual post’s that appear on this blog, but as I said a few weeks ago things were going to get mixed up this is the first of what will hopefully be many more post’s about photography books and photographer’s in general rather than just showing my images.

So first up is this; Robert Capa – The Definitive Collection by Richard Whelan. It’s a damn hefty book, you can’t tell from the picture above but it’s almost as thick as it is wide, and definitive it most certainly is, containing over nine hundred of Capa’s photograph’s from across his entire career. The front cover obviously show’s off what is arguably his most famous work, one of the “Magnificent Eleven” images taken during the D-Day landings in World War Two, an evocative and incredibly powerful image both artistically and historically.

Although you could typecast Capa as a war photographer, his most famous photograph’s (famous in a sense that an ordinary person with no knowledge of him would instantly recognise one of them) are from the Spanish Civil War and Second World War as the book contains hundreds of his image’s a huge selection of them are not connected to war at all. Indeed the early part of the book and first 70 odd photograph’s are more of a documentary/street style coming from his time living in Paris during the mid 30’s, with images of street demonstrations, parades, meetings of political importance and general everyday people going about their business. And at other time’s photograph’s or Ernest Hemingway and other famous people of the period that Capa be-friended and associated with, showing a fantastic historical microcosm of the time.

The book is fantastically detailed, with most photo’s being either a full or half page and in brilliant clarity. It’s one of my favourite factual book’s that I own and I have read and re-read it dozens of times, and probably flicked through casually hundreds more. Of course the vast majority of his work you could find online, and for free, but I would urge anyone who has an interest in the work of Robert Capa to track down a copy, it really does feel different leafing through a book of significantly important photograph’s than staring at a compute screen.

If you’d like to read more about Robert Capa I’ve included a couple of link’s, one being the standard Wikipedia article and the other being a link to Magnum Photo’s website and their bio of the man. And also this link leads to the Amazon page for the book, obviously there are other retailer’s around and you could maybe get a better deal elsewhere if you do a bit of digging online.

Finally as this is a new type/style of post than I usually put out let me know what you think in the comments, and if you’d like to discuss anything about Robert Capa please comment as well.