It’s been 2 month’s since my last post in this series, I know I am astounded by that fact myself. I could lie and say it’s because it’s winter and I haven’t been out much, but the rest of my blog clearly call’s that out, or I could say I’ve not been shooting much street photography lately since the amount of landscape that’s been appearing on here could back that up. But alas I think the reason it’s taken so long for me to get back into using the Olympus OM-1 for shooting street is this, My OMD EM5 is smaller and lighter and I’ve been shooting an awful lot of 120mm recently instead.

From today that will change, this series is about to get a heck of a lot more entries and as I’ve got some days off work coming up, weather permitting, I’ll be dusting off the OM-1 and heading out with a couple of fresh roll’s of Fomapan. So let’s begin shall we? All the following are from my Olympus OM-1, mostly with a 50mm Zuiko lens on Fomapan Classic 100 film.

F1.8, 1/125th Sec. The wide aperture has allowed the focus to be solely on the table and seating directly in front of us but the repetition disappears nicely into the blurry background. I like this arcade as it reminds me of one in the film “Tinker, Tailor, Soldier, Spy”, especially when it’s deserted as it was at this time of the morning.

F1.8, 1/125th Sec. She stopped for just a few seconds to do a bit of window shopping, but I thought the placement of her and her dark clothing against the light store-front worked.

F1.8, 1/125th Sec. The mirror on the pillar next to the window give’s a contrast of reflection’s, one solid and the other more fluid. 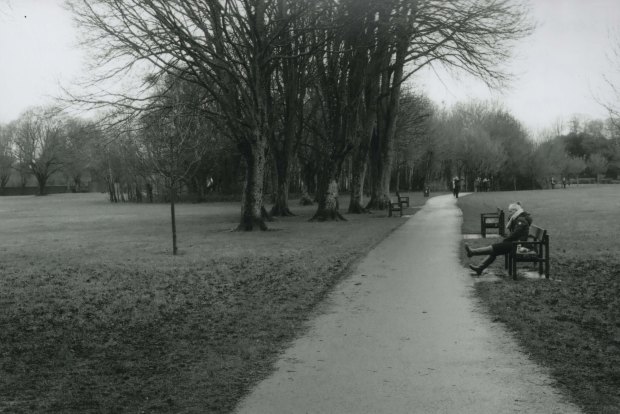 F5.6, 1/250th Sec. I like how the cold morning has been captured in monochrome, making it look mistier than it probably was. I also like how the woman is swinging her leg’s in a carefree way on the bench and how the path leads ours eyes towards her at the same time as splitting the image .