Day seven and we finally climbed to the top of the Duomo itself, exciting for me, not so much for Jo who’s not keen on heights (although will always climb up to the top of cathedrals and buildings with me when I want to). As you can imagine the view was pretty spectacular, the inside of the building itself on the way up however was two things; Hot and Crowded, horribly so on both counts. I was glad to get to the top for a bit of breeze to dry the sweat I was drenched in, I can’t remember exactly the number of steps but it was in the high hundreds and went on forever. One thing I need to mention as it’s one of those things that really winds me up, the amount of graffiti on the way up to the top of the Duomo was shocking, despite the number of signs asking please not to write on the walls. I mean come on, its a historic monument, why would anybody think writing your name on it adds anything? Today we also took a walk up the Mercato Centrale, I bartered with a guy to buy a belt, Tuscan leather is one thing I wanted to buy before we left. I don’t think my poor Italiano was the reason for the supposed heavy discount I got but maybe it helped, I’d also question how much the belt was worth if the market stall guy was happy to drop the price from 42 Euro to 22 without much of a fight. The outside of the market was pretty much all leather goods, this being Tuscany, the inside was a different matter entirely, a huge food hall with street food stalls and food made to order in front of you, bars, the whole lot. The place was amazing, so good in fact that this is where we came for dinner that evening. The final thing we did this day was get some fancy gelato, because why would you not want to do that? I bought a Baci flavoured one, if you’ve never had Baci before then I suggest you try them, in gelato form it’s even better. Anyway these are the final images (well except one from the next morning) of Firenze as the next day we left early for Pisa, this film used this day was Agfa Vista 200 (you can probably tell from the fact the sky doesn’t look quite so vibrantly blue as it does with Fuji) and as usual all taken with my Olympus OM-1 and either 50mm or 28mm lenses. 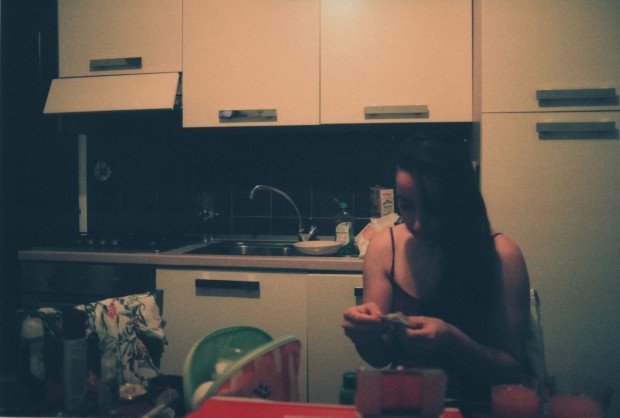 Jo inspects the cost of dinner from the previous few nights? In all honesty I think she realised at this point we still had a whole 3 days left of the trip and was running low on funds. 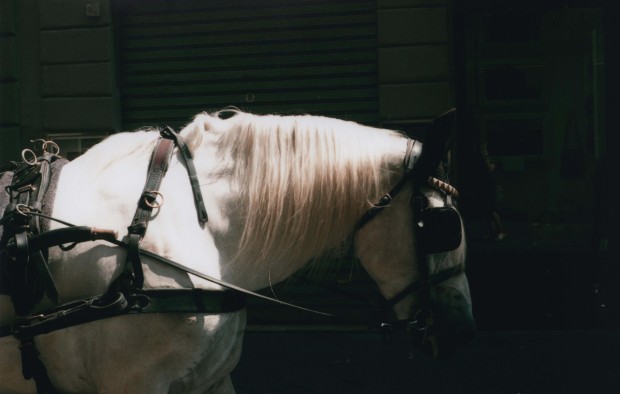 Close up of one of the horses that pull carriages around the streets, the poor thing must’ve been boiling.

The inside of the baptistery opposite the Duomo, if the guidebook described the inside of the Duomo as strangely bare then this place was the total opposite, gilded ceilings and walls aplenty. 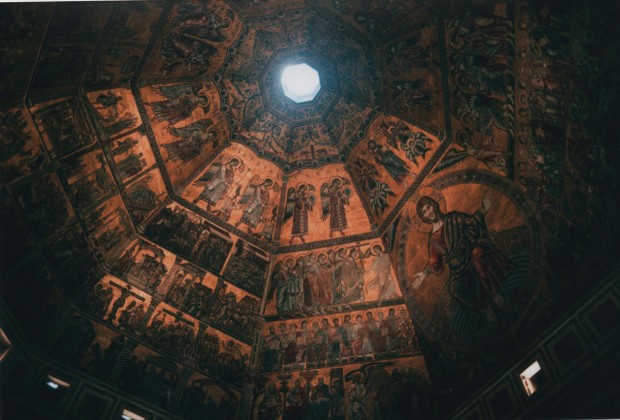 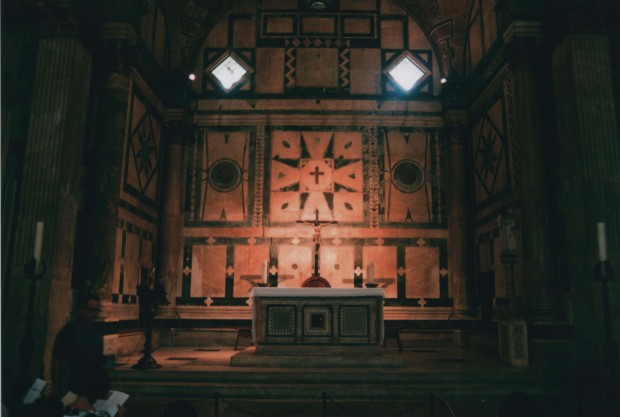 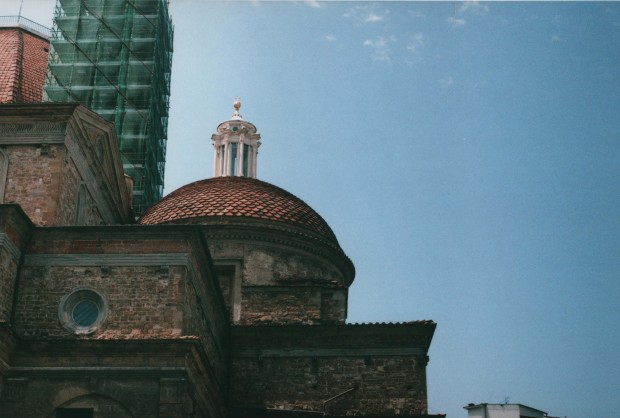 Inside the Maercato Centrale, just one of the many stalls and shops where you bought food and had it prepared in front of you and cooked. I took quite a few street style shots in here with my digital camera, because markets are awesome for street photography. 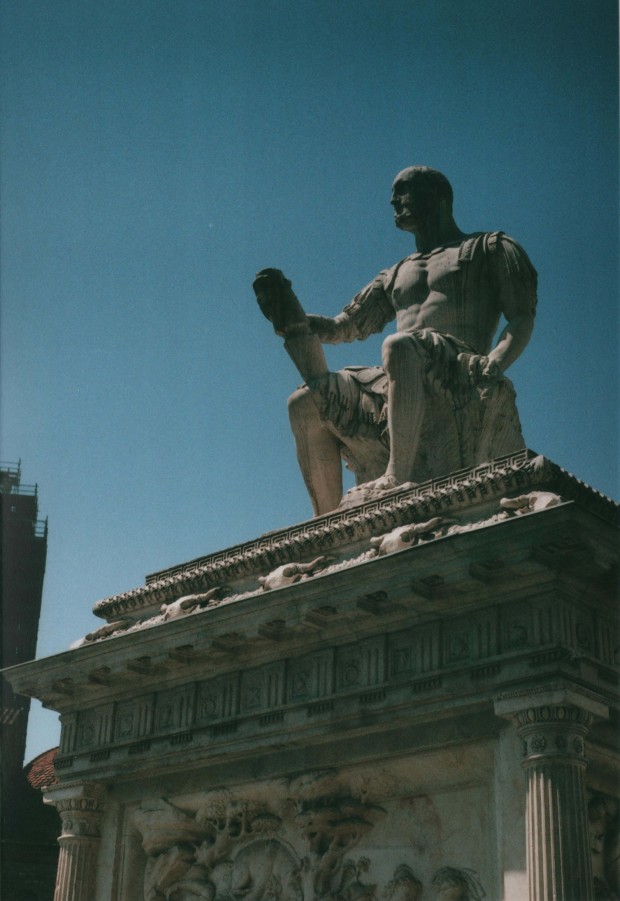 Another Medici I assume. 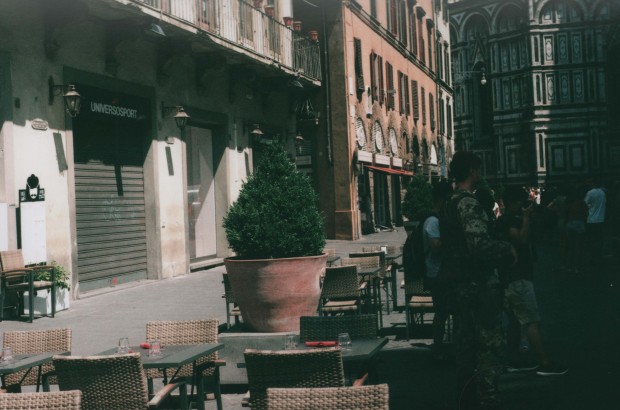 The queue for the walk to the top of the Duomo, it was actually cooler waiting in line than on the walk up. I don’t think we were actually waiting for half hour despite the signs claims.

These guys picked the best spot to busk, right next to two of the main queues for the Duomo, Jo was adamant that the bald guy sat down was the spitting image of an ex boss of hers. Their music choice was shall we say “eclectic”, it’s always weird as a Welshman to go anywhere and hear someone signing/playing Tom Jones songs, especially when played on violin and Cello before Viviladi and after the theme song from the Godfather. 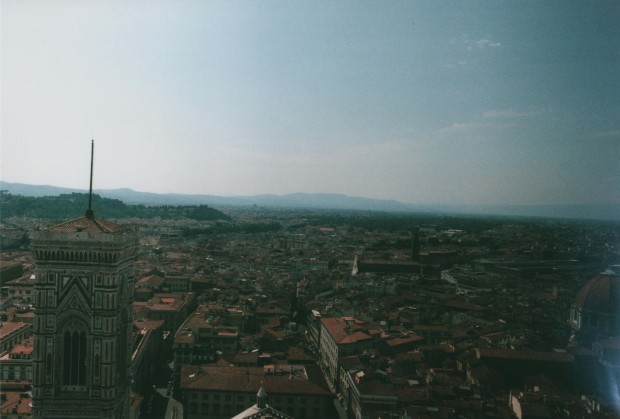 A few views of Firenze from the top of the Duomo, absolutely beautiful views, shame about the damn film on the second shot though.

I had no qualms about standing next to the railing, Jo wasn’t as keen. To be fair there was not a lot of room up there and it was pretty open. 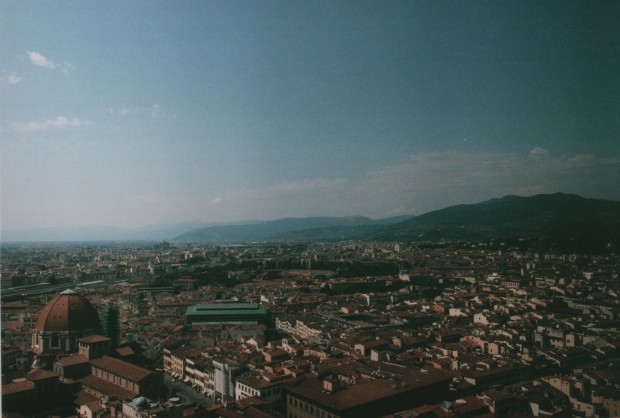 Such a stunning place Firenze.