I had a bit of a change with my street photography around February this year, very much influenced by the workshop I went on that highlighted some of my flaws, and a lot of opportunities that I had been missing. The first of these was having a new found desire not  just to photography shadows, light, darkness and where the shapes and all of these intersect but also to seek out interesting looking people to go with this. Hopefully this post shows some of the first of this new direction I’ve taken.

As usual these are all taken with my Olympus OM-D EM-5 and either 25mm Panasonic Leica Summilux or M.Zuiko 17mm lenses. Enjoy them. 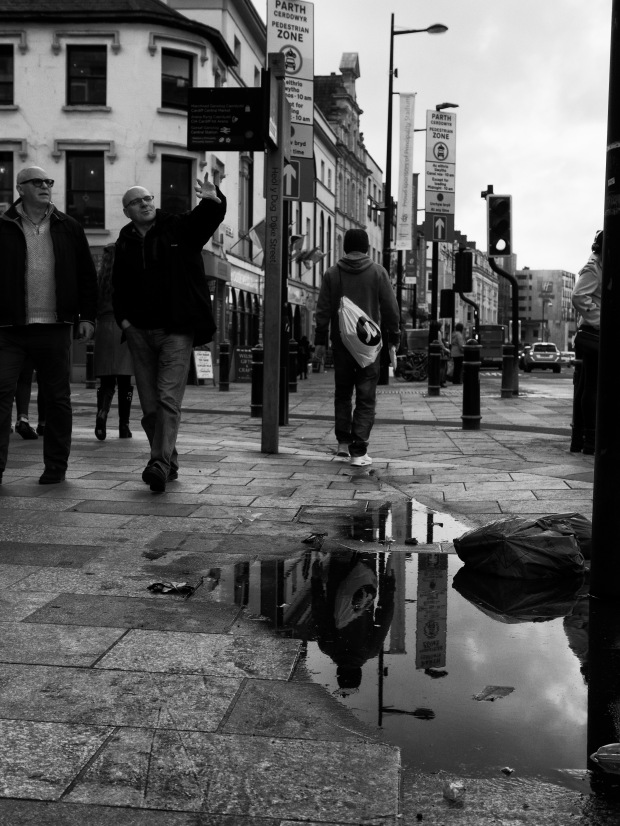 25mm, ISO 400, f4, 1/800th sec. The main aim I had with this image was to capture an interesting reflection in the puddle, hence why I waited for the guy with a backpack to walk past, however what I also got was the two men deep in conversation on the left, framed in by the street sign above and to their right, one of them pointing out something in the distance.

25mm, ISO 400, f4, 1/1250th sec. I’ve always like to photograph people at work, doing their jobs and just acting naturally. I don’t know whether it’s a desire to document normal life or just because it’s an easy thing to photograph on the streets but this is exactly oneof those images.

25mm, ISO 400, f4, 1/200th sec. An image I probably would’ve missed if I hadn’t have slowed down and taken a peek through the gap in the cardboard that had been put up in the window of this shop that was being renovated. The use of empty space was what I was going for as well as the framed head of the man.

25mm, ISO 400, f4, 1/500th sec. An example of an interesting looking person, there’s nothing about light or shadow here, just someone pushing a trolley of goods and looking off into the distance. I wonder where she was going?